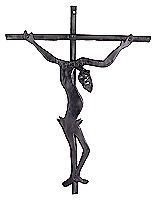 Murat Brièrre was the first student of the master of Haitian metal sculpture, Georges Liautuad. Prior to becoming a professional artist, and also like his teacher, Brièrre worked as a metal smith. This provided him with the skills needed to make metal conform to a desired shape. Brièrre's later works are often larger pieces, employing the entire length of a flattened oil drum. This Crucifixion combines both vodou and Christian ideas. This sculpture shows the biblical story of Jesus crucified on the cross. For followers of vodou, the cross is also related to Bawon Samdi, the master of the cemetery. The cross marks the crossroads between the realms of the living and the dead, and is a symbol of Bawon Samdi the head of the Gede, the vodou lwa (spirits) of death. Brièrre did a group of sculptures in 1980 that were variations on the cross titled the Crucifixion Series.

MASKS ARE CURRENTLY REQUIRED FOR ALL GUESTS